Among Wile E Coyote’s more famous abilities (shared by various other comic characters as well) is that of walking off the edge of a cliff without noticing it, and not falling. It’s not that Wile E lives in a world without gravity – he’s made many a big hole in the ground by falling from great heights. Rather, it’s that gravity – in the animated universe – only works on him when he expects it to. Until he notices that he stepped off the cliff, he moves forward perfectly comfortably, as if walking on an invisible platform that can support him just fine.

Much of mathematics is a sort of invisible platform that supports us just fine. Or at least it once started out like that.

It’s a common practice to find a pattern and then extend the pattern beyond where it makes immediate sense. That’s like stepping beyond the edge of the cliff, and then finding out later whether you fall or not. A simple example of this is negative powers. We know that 10 to the second power is

, and we can write this as

, and we can write this as

is the number of tens being multiplied together. If we looked at the following pattern:

we know how to extend it downward indefinitely.  But how about extending it upward?  Once we notice that, going upward, each number is one tenth the number below it, we could be Wile E. Coyote and produce: 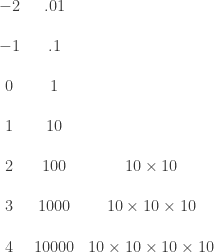 and simply see if and when we fall.  Until we fall, we could notice that

.  We have extended a pattern into unknown territory, and so far we have survived it!

This entry was posted in Uncategorized and tagged extending patterns, standing on nothing. Bookmark the permalink.