This is a puzzle, taken from the famous puzzle producer Sam Lloyd, complete with original illustration.  This puzzle is old: 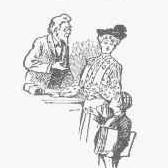 A lady bought a boquet at the florists for thirty-four cents and had a one dollar bill, a three cent piece and a two cent piece.  The florist had but two coins in the till, and therefore could not make the change.  A bright newsboy came in who had two ten cent pieces, a five, a two and a one cent piece, who showed them how to clear the financial situation so that every one was left with their correct amount of change.  How did they manage to do it?

This occurred in the old days when two and three cents pieces were in vogue.  The boy has since grown to manhood, and is the cashier of the largest banking institution in the United States.

Just the strangeness of the amounts and the denominations makes this puzzle feel harder than it has any right to be.

This entry was posted in Uncategorized and tagged denominations, models, puzzle. Bookmark the permalink.