Eachof the above notations has an underlying assumption that the pieces are all to be added together.  Could we construct another system of representation of quantity that is based on multiplication rather than addition?  I’ll show one way we can do that in this post, a way that is based on prime numbers.  Let’s be clear that I’m not suggesting you drop the decimal number system in favor of the this one.  I’m offering an alternative representation of quantity, to suggest that our elementary school experience of addition being easy and multiplication hard may be an artifact of the representations of quantity we are used to.

In the prime bag system, the building blocks are prime numbers: two, three, five, seven, eleven, etc.  (To these, we would later have to add the number zero, half, negative one, and others, to extend the system beyond the counting numbers.)  We can put these prime building blocks in a bag, e.g. [two, two, five].  This bag now represents a quantity.  What quantity does [two, two, five] represent?  Well, in this system the pieces are supposed to be multiplied.  Two times two times five is the quantity twenty, so [two, two, five] represents the quantity twenty.  The prime bag [three, seven] represents the quantity twenty-one.  Note that, for us who are used to the decimal system, it seems difficult to have to multiply all these pieces two, two and five.  But in this system, you don’t need to do the multiplication any more than you have to do the addition in the decimal representation {thousand, one, one} for the quantity thousand-two.

Representations suppress certain aspects, as they highlight others.  In the normal decimal representation, prime factorization is not easy to do – in fact, modern systems of cryptography are based precisely on the difficulty of factoring numbers presented in the decimal system (or variants like the binary system).  Conversely, the downfall of the prime bag system is that comparison is fairly hard to do: is [two, two, five] more or less than [three, seven]?  Which one represents “more” quantity?  The question can be answered, but not straightforwardly. 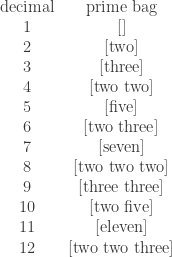