The Whole and the Parts – Packaging

My earlier posts in The Whole and the Parts series may have seemed “less mathematical” to you than other posts in this blog.  They didn’t involve a whole lot of arithmetic, little notation and few if any formulas.  Whatever mathematics there is in these subjects – and I suggest there is plenty – isn’t immediately recognizable as such, and it isn’t the kind of mathematics we had in school.  When we look at the issue of the whole being more than the sum of the parts, we aren’t looking at linear relationships, and we may even be looking at non-invertible relationships.  The effect is that if you are to come across models where the whole is more than the sum of the parts, you likely encounter them in engineering class, or biology class, or in social science classes.

In math class, you may see questions such as this one:

I can sympathize just a little bit with that textbook’s approach.  It is trying to give students access to proportional reasoning, and it is trying to spice up the subject by examples from the real world.  The textbook means well.

However, textbooks who pull stuff like this are coming from it backwards.  They start with the method they want students to use, and then look for a sexy-sounding example, but they don’t look to make sure that the example is actually an example of the problem domain you’re trying to teach about, and they don’t make sure that the method you’re trying to teach is actually the method you’d use in the real-world example.

Proportional reasoning is immensely important and has tons of real-world applications.  We just have to look for them, with an eye on the application being real.  Here’s an example from my daughter’s book on drawing anime: 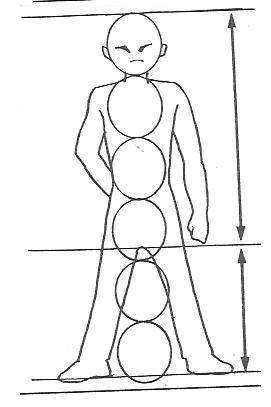 If you now refer back to the math class textbook example, you can newly appreciate how lame it is.  It is a rare store that allows you to break up a six-pack and buy single cans of beers, and a slightly rarer store still that would charge you exactly one-sixth per can as they charge for the six-pack.  And if you find a store that does, they only do it because taking a single can of beer out of the six-pack doesn’t destroy the packaging for the remaining five, nor does it hide that one can has been taken.  And this is an artifact of how six-packs are packaged: usually with a plastic ribbon around six individually packaged cans of beer.  In this same permissive store, try pouring half of a can of beer into your own plastic bottle, and see how they respond to that at the checkout counter!   Try tearing a roll of 14 mentos in half and take it to the checkout counter to buy it for half the price, and see what reaction you get.

In a store, the notion of unit pricing – that is, the notion that 10 units cost exactly 10 times as much as a single unit – only applies to pre-chosen units and only for small numbers.  If the bottle of aspirin has 100 aspirin tablets in it, you can’t count on being able to buy 85 aspirin tablets, let alone for the same price per tablet.  If next to the 100-tablet bottle, the shelf has a 250-tablet bottle, you expect the price per tablet for the big bottle to be less.   You expect to get a discount for buying in larger quantity.  The notion of a fixed price  per tablet, so beloved in math class, is a fiction in the real world, sometimes convenient, sometimes complete nonsense.  In math class, we introduce species who run at a constant speed for unlimited amounts of time.  Kids in math class accept the strictures of math class, and engage in their normal job of figuring out what the teacher wants.  If the teachers wants the answer 2.5 to the question “how many buses are needed to transport 100 kids if each bus can take 40 kids?” then the kids will provide that answer.   They can play the game.  In math class, they learn to ignore that there is something very special about a whole bus that half a bus fails to provide: it can transport people.  In later years, we will then complain about the students, that they don’t know how to check their own answers.  We complain that kids will blithely answer  a problem about cookies by saying each cookie cost $120.  Can’t they see, we despair, that the answer must have been $1.20?  Who would pay $120 for a cookie?  Maybe, just maybe, we’ve trained this kind of skeptical reasoning out of them.  In math class!

3 Responses to The Whole and the Parts – Packaging