If I ask you to count, starting at 103, for five counts, you do so by keeping track of two quantities.  You keep track of them in your head, by speaking out loud and listening to what you just said, or you may seek help in using fingers or other implements.  One way or another, two quantities need to be kept track of.  It isn’t enough to be able to count, in this case you also need to know where to start and when to stop.

Keeping track of multiple quantities in relationship to each other, that’s a key capacity to develop and expand.  One place where it shows up in middle school math is with percentages and proportions.  In this post, we’ll look at a simple but interesting scenario.

I often start this with a seventh grader, by presenting the following sketch on a blank piece of lined paper:

It may surprise you, as it surprised me when I started to do this with seventh graders, that so little use is made of multiplication.  They could have gotten all these numbers through multiplication by 48 cents.  None of them do.

At the same time, these students seem to have a very firm grasp on a rather sophisticated idea about scaling: 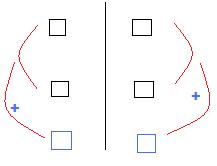 that if you add two numbers on the left, you can add the numbers on the right, and get a new pair of numbers that fits.  Though not every seventh grader is able to articulate this well, I have yet to encounter one who didn’t use this idea – including students who otherwise seemed to reason at a fourth-grade level.

Here’s a relationship between six numbers that students seem to be able to hold on to, and use!  Moreover, I very much doubt that this was a relationship they were taught once and happened to remember.  They sure didn’t remember the more recently-taught material about multiplying by the 1% number.  Instead, these kids seemed to work out the additive relationship on their own, and without any fanfare.  Me, I think this is pretty darn cool.