In the following figure, three situations with powers are shown:

The table on the left shows powers of 2.  You can ignore the entry for zero, if you like.  Also, don’t be put off by the notation 2^n instead of the (probably) more familiar

.  The thing to focus on is that each entry in the table is twice the value above it.  As you can see, the values in the table grow very rapidly.

Below, I show a graph of the powers-of-4.  Note again how fast the values grow.   In the same space, powers of 2 are shown, using the red scale for the horizontal values, and red dots to mark the values.

The black dots and scale represents

and the red dots and scale represent

.  Since the graph for

and the graph for

overlap so nicely, we are going to ask ourselves what the extra red dots mean with respect to the graph for

.  In other words, if we were to draw black dots where all the red dots are, what would those new black dots mean?  This is shown below: 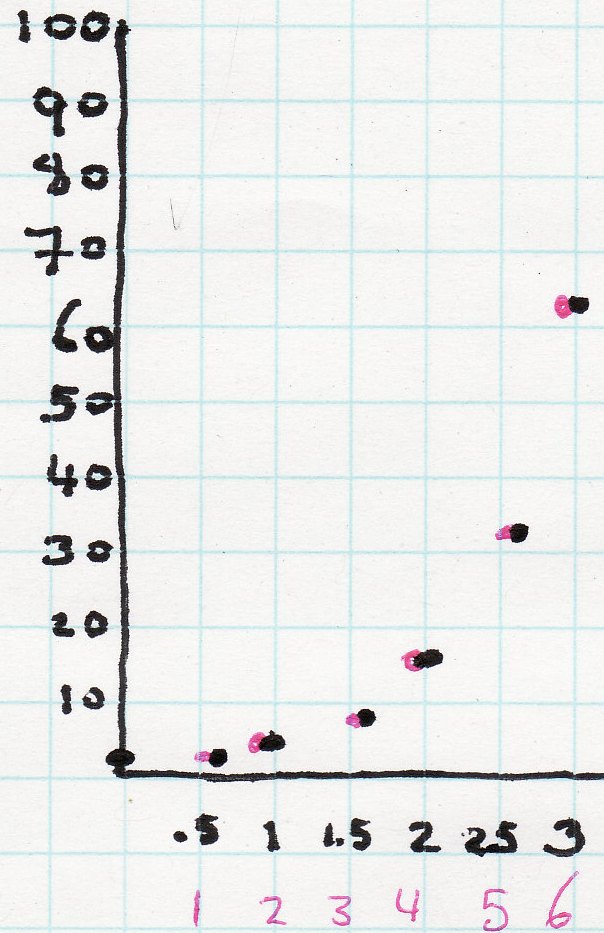 If we were to trust the pattern of the black dots, and treated it as a graph of

for both whole and “half” values of n, we have now extended our notion of what a “power” is.  Our graph shows values for

.  Where do these values come from?  We got them from embedding

.  We get to play Wile E Coyote for a while, standing on nothing, and hopefully not falling for a while yet.

Let’s end this post with an equation for what

This entry was posted in Uncategorized and tagged denominations, embedding, extending patterns, models, naming, reverse engineering, standing on nothing, unlearning. Bookmark the permalink.