What is Multiplication – part VII

In the prior post we looked at the array model for multiplication.  At least, this is the way we usually talk about it: as if it is already clear what multiplication is, and we just want a way to show it and explain it.  And there is no doubt that good models can be of great help in passing on ideas to other people.

Yet the intent of the “What is Multiplication” series hasn’t been primarily about explaining what multiplication is and giving models to help explaining it to others.  Rather, I’ve been playing with an investigation into the nature of multiplication to see if we can get a new and fresh handle on how come kids seem to have so much trouble in keeping the world of multiplication distinct from the world of addition.  It is an outgrowth of an observation/hypothesis I shared in the post Middle School Math – What is Hard?

is the same as

.  Though 3 rolls of Mentos candies may indeed contain the same number of candies as 14 rolls where each roll has precisely 3 candies in it, both the Mentos company and the Mentos customers are very clear that those situations are very different.  Though the owner of the landscaping company may bill the same for a crew of 3 people working 4 hours and he would for sending a crew of 4 people working 3 hours, the situations are very different: just ask that fourth worker.

Of all the models we played with, the array model stood out in that it displayed the most symmetry.  In the array model it was fairly easy to see that 3 rows of 2 oranges each was also 2 columns of 3 oranges each.  Since the rows and the columns only existed in the eye of the beholder – no wrappers are involved – the very same physical arrangement of oranges can be pointed to for each.  The same physical arrangement of 6 oranges is at once 3 rows of 2 oranges and 2 columns of 3 oranges.  More abstractly, you often hear people say that 3 rows of 2 columns is the same as 2 columns of 3 rows.  Still, this is a different observation from saying that two rows of three oranges each is the same as three rows of two oranges each.   To make the latter observation, we need to turn the oranges, or we need to turn our head. 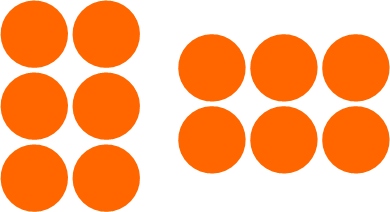 The kid I observe who has no trouble expanding 3(x+1) to 3x+3 but can’t for the life of him figure out what to do with (x+1)3 – this is a kid who is caught between a mix of things: notational conventions that has the 3 at the end look strange, instructions that make expanding seem important but which never make it clear why we’re expanding in the first place so in his universe expanding is not a solution to any problem he can appreciate, and something fundamental about the nature of multiplication  (rather than the nature of variables) that is at play here.  Sorting out these various difficulties and elucidating the part played by the nature of multiplication – that is my intent here.  And to fulfill on that intent, there is more to go.

1 Response to What is Multiplication – part VII