It is pretty clear that a representation of something is not the same as the something itself.  “A map is not the territory” Korzybski wrote famously, and most of us would react “well, of course!”  You would expect to encounter things in the territory that wouldn’t be on the map.

Here are some different kinds of map of the state of Texas.  The first one is called a ‘political map’: it shows the political boundaries – counties.

The next map shows elevation:

It is typical for maps to push certain kinds of information into the foreground, relegating other information into the background.  For example, the elevation map still shows county boundaries, but dispenses with county names.  The third map shows roads and cities – this is the kind of map that comes to mind for many of us when we think of a map: 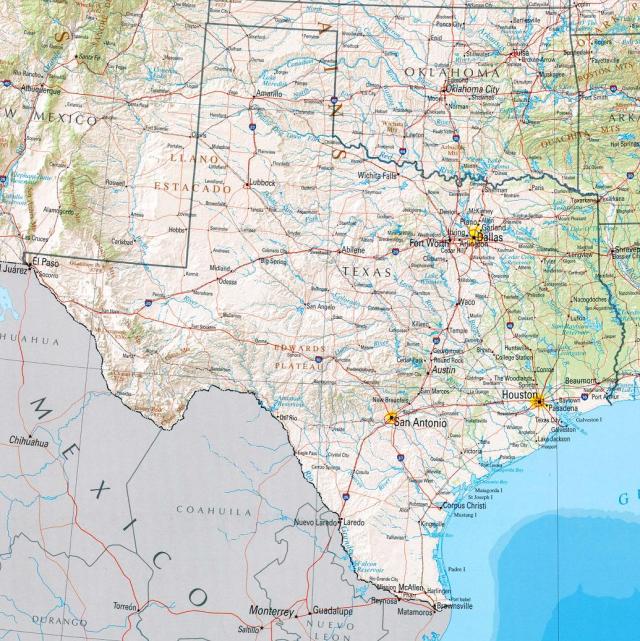 A good representation allows you to see clearly the aspect it intends to show, uncluttered by the vast amount of other data that it could show.  No map can show everything – and certainly not all at the same time.  Google Maps is wonderful: it lets you zoom in and out, and can show you street-level photographs as well as aerial photography – and yet the process of zooming in is itself a perfect example of pushing certain kinds of information into the foreground and relegating other information into the background.

What applies to maps applies to any other kind of representation, in much the same way and much for the same reason.  You can’t have everything in the foreground.

When I was in graduate school, I would buy texts that had had a previous owner, since they were vastly less expensive.  What made these particular used texts so cheap is that the previous owner had highlighted sections with (often purple) highlighter.  Sometimes so much of the text was highlighted that the entire thing looked purple.  If too much of the text is highlighted, it is no longer highlighting anything.  Highlighting only works in the contrast with low-lighting.

When children make representations for mathematics, you can see this process at work as well.  Young children, when showing their work on the problem “I have three chickens, then later I get two more.  How many chickens do I have now?” will draw chickens and will make a real effort to have them look like chickens.  An older child may take three blocks, and add to more blocks to the pile, and count the whole pile, counting five blocks.  The answer will be “5 chickens”.  For this child, the block represents what is important about the chicken, and details like feathers and feet have been relegated into the background.  An older child may write “3 + 2 = 5” and relegate even more details into the background.  It is tempting to assume that this represents a linear progression, where 3+2=5 is simply better than counting five blocks, and five blocks is better than drawing five chickens.  Many teachers do assume that “3+2=5” is more mathematical than a picture of five chickens.  When 8th graders say

Just like the question “which of these maps is best?” has no situation-independent answer, representations of mathematical ideas are not necessarily sortable in terms of worst, better and best.  We often confuse the suitability of a representation to work through a mathematical problem with that representation’s familiarity and conventional acceptance.

This entry was posted in Uncategorized and tagged education, extending patterns, models, representations. Bookmark the permalink.

1 Response to Representations – Foreground and Background