Subtraction: The Dot For “Borrowing”

In this series, I’ve been exploring notational issues and their impact on student learning.  So far, I’ve been hesitating dealing with the standard subtraction algorithm as taught in the USA for two reasons:

1. I’m not at all convinced that teaching standard algorithms for “long subtraction”, “long division”, etc. is all that useful.  Yes, it is very important that kids learn what subtraction is and what division is.  It is important that kids learn algorithms for subtraction and algorithms for division.  But that doesn’t mean that the algorithm they learn needs to be the standard one, and it doesn’t mean that the algorithm is taught as a series of steps.  I know no adult professional who uses long division if they have an alternative.  In most cases, the alternative will be the use of a calculator, or a spreadsheet, or some related tool.  Before calculators and computers, professionals used log tables or slide rules.  The notion that teaching long division teaches kids a useful skill is suspect.  The notion that teaching long division teaches kids something fundamental about math is also suspect.  After all, most kids who do know long division nevertheless have no idea why it works, and kids learning different methods (e.g. the method known as “the big 7”) may well end up with a better sense of what division is.

Still, I know that long subtraction is still taught in many places.  My purpose with this blog is not to add fuel to controversies; my interest is in adding light, not heat.

2. I was taught a way to do subtraction different from the one that is typically taught in the USA, and I’m generally reluctant to tout things I happened to be taught as being better.  There are so many ways in which one can be prejudiced and not impartial when it comes to one’s own background.  People say their own mother cooked better pancakes than anyone else in the world, or people say their home team is the best.  Others learn to ignore this, or treat it with suspicion.

Still, I think it useful to show a way of doing multi-digit subtraction that is standard in other parts of the world, and introduce it to US teachers, and suggest how it avoids certain confusion and misunderstanding.

Let’s start by reviewing the USA standard for subtraction, with particular attention to borrowing.  Here is a diagram from an exposition on how to subtract14 from 402.

It starts by writing the two numbers one below the other, aligned so that the ones are below the ones and the tens below the tens etc.  The general flow of the algorithm is from right to left.  So we attempt to subtract the 4 from the 2, and conclude that we need to borrow.  We borrow one from the place value to the left, which gets us ten in the current place value.  In the picture you can see the ten as the orangish 1 written just above the 2, making it 12.  The place value to the left is showing a zero, so borrowing one from it is problematic, and we need to go further left.   We can borrow 1 from the 4 (shown as crossing out the 4, and writing 3 above it) and that allows us to write the gray one just above the zero, to turn that place value into 10.  But we needed to borrow one from it for the right-most place value, so the 10 is itself crossed out and changed into the red 9.  In this example, this completes all the borrowing necessary, and we can now subtract 4 from 12 in the rightmost position, and subtract 1 from 9 in the middle position, and subtract nothing from the 3 in the leftmost position.

Since this is so familiar to most of us, I don’t know if you can appreciate how messy this is.  The diagram shown is nicely color coded, and the numbers are spaced properly.  Even so, it looks messy.  When kids do this, you can often no longer distinguish what the number was that we started out with, making it hard to double check the work.  In addition to it being messy, the algorithm also doesn’t proceed smoothly from right to left.  To complete the process of borrowing, we often have to move much further to the left, crossing over all the zeros, to get to a place where we can find a one to subtract.  This one, becoming 10 in the place value to the right, then becomes a 9 and a propagating 10 further to the right.

Here is how this subtraction looks in the standard algorithm that I was taught:

In this algorithm, subtraction does proceed strictly from right to left.  There is no crossing out of numbers.  When subtracting 4 from 2 in the rightmost position, we decide, as in the standard US algorithm, that we need to borrow.  To indicate this, we put the fat dot above the column to the left.  The fat dot represents the fact that there has been a borrowing, it represents the IOU.  It also indicates that we can now read the 2 as a 12, and we subtract 4 from 12 getting 8.  Note that at this point, we haven’t done anything yet with the leftmost position.  When we look at the middle position, we see a 0 on top, a fat dot above it, and a 1 below it to be subtracted.  The fat dot indicates that we have to subtract an additional one, to make good on what was borrowed before.  We can’t deliver based on what we have in the middle column, and thus place a fat dot on top of the leftmost column, borrowing ten units for the middle column.  These 10, minus the 1 for the fat dot in the middle column, and minus the 1 from the bottom number, gives us 8.  Now we turn our attention to the left column.  Here we have 4, with a fat dot, reducing it to 3, and we have nothing from the bottom number to subtract from it.  So we are left with a 3.  The digits 3, 8 and 8 tell us that the result of our subtraction is 388.

Note that the original numbers are still neatly visible, none of it has been crossed out or overwritten.  So we can double check our arithmetic, or check the subtraction in another way (e.g. adding 388 to 14 to see if we get 402).  Note that each column was handled in the same way, one at a time.  For each column, there was a top digit, a bottom digit, a possible fat dot on top to indicate that 1 had been borrowed.  The work on that column then gives us a result digit, and a possible fat dot for the column to the left.  We are then ready to turn our attention to the next column to the left.  The diagram below shows the mechanism at play in each column: 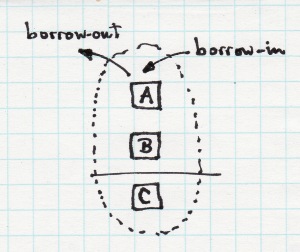 Almost all computer arithmetic, e.g. the processors in your PC or MAC, use subtraction hardware that matches this algorithm in all essential aspects.

You can think of the fat dot as playing a dual role: when we place a fat dot to the left or our current column, we can read it as a leading 1 for the number in the current column, e.g. turning the “2” into a “12”.  When we advance to the next column, the column to the left, this same fat dot now looks like a “-1”, an extra one to subtract.

Please note that in many aspects, the algorithm I sketch here uses the same ideas as the standard US algorithm.  It is based in similar ways on place value, it is based in similar ways on taking “1” from the left and getting “10” in the current position.  The major difference is in notation, and the fat dot notation avoids the crossing out of the digits we start with.  A nice side-effect of this notation is that we can truly look at it as a borrow, rather than as an exchange.  The term “borrow” is often used when talking about the US algorithm, but we travel all the way to the left as needed to ensure that we pay before we “borrow”.  In contrast, the fat dot can be seen as a pure IOU, or can be seen as a new digit that represents “-1”.

I propose that teachers use the fat dot as a notational alternative for indicating borrowing, and avoid crossing out numbers.  They can do this even when holding on to the notion that you have to go left all the way past zeros till you ‘land’ on something solid.  The fat dot can be used as a way to show multi-digit subtraction even if kids later learn and use the standard US algorithm; it is especially advantageous for kids who already write messily or don’t have fine motor control.

In the next post, I’ll show how this notation can be extended to represent negative numbers.  This extension is not actually part of the algorithm as I was taught it, but the extension is both useful, clean, and has real applications in the way computers do arithmetic.

2 Responses to Mathematical Notations and Schools – 7