In this series, we’ve done a review of mathematical notation, with an eye on how each notation helps or hinders student learning.  The focus here is modest: on what teachers can do, even if their textbook sticks to the standard notation, to help disambiguate the standard notation for students.  In the last several posts, we’ve been looking at notations for expressions.

The subject of functions in K-12 is typically only broached very tentatively, gingerly.  Usually, kids learn to associate functions with graphs.  Typically, there may be a situation, which relates two quantities.  For example, a square has a certain side length and a certain perimeter.  As the side length changes, the perimeter of the square changes also.  The perimeter and the side length are related.  This relationship can be shown in a table, shown in a graph, and shown in an equation. 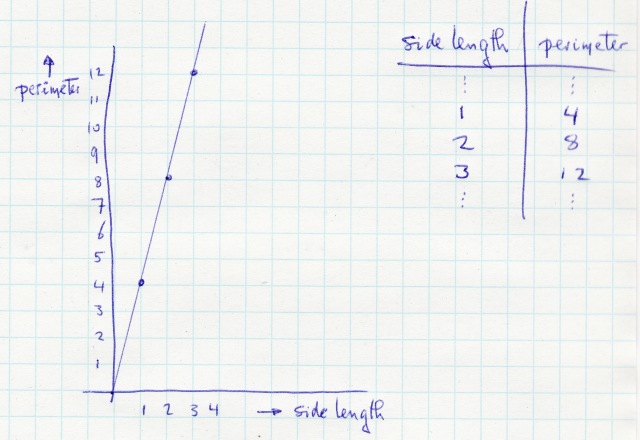 , that notation seems to have exactly zero relevance.  Students don’t typically get why saying

is in any way better than saying

.  And no wonder.  They are told that the

stands for function, and it may take years before they ever see others like

.  What functions are not, for these students, are objects that can be held up to the light and examined, and compared to other functions or combined with other functions.  And truly, if all you ever do with

then there is no point.  Even if students later encounter

, it doesn’t seem to relate in any way with the function notation they’ve seen in

Middle school students and middle school teachers can be forgiven for totally missing out on what’s important about functions at that level, and that is composition of functions.  Composition of functions is a very simple and powerful idea to get a new function from other functions.  For this to make sense, we need to move away from the beautiful and carefully developed notion of a function taught at the college level, which is based in set theory, where a function is seen as a special kind of relation.  Instead, a useful model of what a function is at the middle school (even high school) level is that of a little machine with an input and an output:

We imagine that whenever something (usually a number) is put on the input, something is produced on the output (also usually a number).  It is important that the output can only depend on the input, and on nothing else.  Another way of saying this is that they are state-less: there is no internal state in the box, no memory of what went before, nothing that changes permanently based on what came before.

If we only had a single kind of function box (even if we have a thousand copies of it), the box doesn’t need any particular kind of label.  Even a stupid label like

would do fine.  But if function boxes come in all different kinds, we need good labels to keep things straight.  If we know what a particular box does, we should find a way to say so on the label; and if we don’t know (or care) what is in a particular function box, the label should say so as well.

Though we could label function boxes in different styles and according to different criteria, we’d like function boxes to be able to take their place inside of expressions as full-fledged components right next to the My Dear Aunt Sally stuff.  For example, a solution to the quadratic equation, rendered in standard format as

where we’ve used simple function boxes for negation(change sign), square (input times itself), double (input times two) and square root.  If you are very familiar and fluent with the standard notation, my sketch above will not have impressed you.  Yet the picture below, showing a simple composition of functions, displays some interesting patterns: 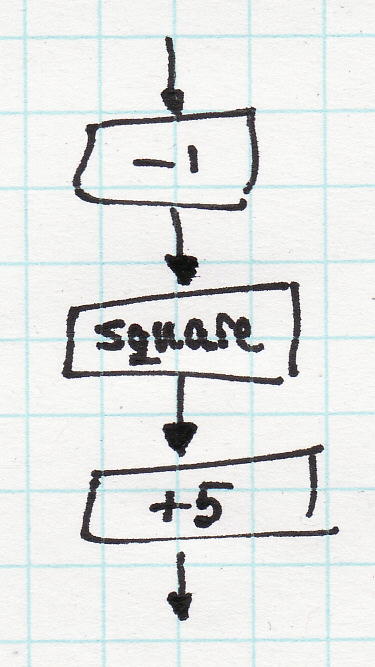 You subtract one from the number coming in, square the result, and then add 5.  If you know the behavior of the square box in the middle – for example, you know the parabolic graph that corresponds to it – then the function box on top tells you to move that graph one over to the right, and the bottom function box tells you to move that graph up 5, resulting in:

In the next post we’ll explore more about composition of functions, how it is useful and powerful, and how notation can help highlight this.

1 Response to Mathematical Notation and Schools – 12